Why Companies Get Hit With Ransomware More Than Once

Why Companies Get Hit With Ransomware More Than Once

Ransomware is now a common threat affecting businesses, governments, and individuals across the planet. Studies reveal ransomware attacks increased by a whopping 148 percent in 2020, mainly due to the increased adoption of remote work due to the pandemic. Additionally, the average ransom fee requested by cybercriminals increased from $5,000 in 2018 to around $200,000 in 2020.

Recent surveys also reveal 80 percent of ransomware victims are likely to suffer repeat attacks, with the average number being two repeat attacks per year. About 46 percent of the companies targeted a second time are attacked by the same actors that initiated the first attack. This blog explores why victims get hit with ransomware more than once and how to reduce the risk of an attack.

Four Things That Can Lead to Repeat Attack

The main reason why victims get hit by a second ransomware attack is due to poor cybersecurity posture. In most cases, organizations fail to address the underlying issues that led to the initial attack, thus exposing the organization to a higher risk of subsequent attacks. Specifically, if you have internet-facing computers that are vulnerable or unprotected, they are more susceptible to multiple attacks and abuse. It is crucial to keep in mind that ransomware groups typically exploit missing or weak security oversights to monitor your system after the first attack. Failure to address these common oversights after an attack will result in reinfection.

There are also scenarios where persistent threat actors create backdoors that allow for continued access to your system long after you have resolved the first attack. In such cases, the threat actors maintain their access with the help of a top-notch infection malware like a Trickbot infection. The criminals owning these backdoors and their affiliates may sell or trade them with other groups, which means that a successful attack by one group could ultimately result in a successful attack by another.

The only way to detect such an infection is to carry out a forensic investigation that can help prevent another attack. You should also rebuild your networks after an attack rather than just decrypting your data.

Once a ransomware attack has occurred, it may spread across your entire network. Network-based malware leverages your machine’s system connection to locate different computers on the same network. Once you pay a ransom to solve the initial attack, the actors who still have control of malware in other parts of your network can still execute other attacks easily.

Ransomware groups can also take copies of data before performing the encryption once their demands have been met. The criminals may provide worthless assurances that they have deleted their copies of company data after you pay the ransom. This data could add a second layer of extortion later, with criminals threatening to leak it if you don’t pay a second ransom. They can also sell the data to affiliate groups who will use it to leverage yet another attack or round of extortion on your company.

How to Prevent a Repeat Ransomware Attack

Essentially, there are no rules cast on stone for preventing a repeat attack. However, the following tips can help you wade off opportunistic actors wishing to exploit your systems for another round of attack.

Investigate the root cause

You should also keep in mind defending against a ransomware attack is an ongoing process rather than a single one-off event. There is no point in securing your environment only after an attack. You should put in place mechanisms that guarantee your environment is continuously monitored to prevent further exposure.

Set up a firewall

A robust firewall serves as the first line of defense against ransomware. Firewalls are designed to monitor all incoming and outgoing traffic for potential threats. Because they scan all kinds of activities in your system, firewalls help your security team detect signs of malicious activities early for remedial action. The ideal firewall should have the capacity to run deep packet inspection (DPI) to analyze data content for hidden threats. These capabilities can effectively identify any package with infected software.

Once ransomware gains access to your network, the malware will move laterally across the entire network until it reaches the target data. When you segment your network, you will prevent hackers from moving freely between devices and systems to cause further infections. You can achieve segmentation by ensuring each subsystem in your network has individual security controls, a separate firewall and gateway, and unique access policies. With a segmented network, intruders need a lot of time to break into each subsystem, which gives your security team time to detect and resolve the threat before it happens.

Employees typically provide the most vulnerable point for a ransomware attack. Soon after the first attack, it is critical to conduct routine security awareness training to explain to your staff their role in preventing future attacks. An ideal staff awareness program should help employees to:

It is advisable to review the users who have privileged access to sensitive organizational data. A review should be done soon after an attempted attack or a successful attack. You should also make it standard practice to review access protocols whenever there is a changeover in your staff or changing roles. It is also good practice to routinely review permissions and adopt a system of rotating credentials or temporary credentials.

Let the Experts Secure Your Investment from Ransomware

By now, you understand ransomware is one of the massive threats facing all types of organizations across the globe. Once your company has been hit, you’re likely to be targeted again. A ransomware attack could have far-reaching consequences, including loss of company data, a temporary or a complete shutdown of company operations, financial loss, and damaged reputation.

A proactive approach to stopping a repeat ransomware attack is the most effective way to keep your organization safe. If you need help implementing some of the proactive strategies outlined above, reach out to On-site Computers today. Our team of cybersecurity experts will answer any questions about the impact of ransomware on businesses in Minnesota and why you need a professional firm to ensure you don’t get hit more than once. 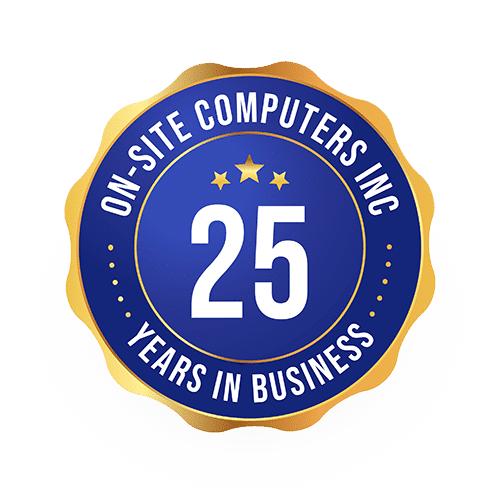